Crash through traditions to unlock a world of money.

We helped create ‘Your Way In’, a new brand platform for Revolut which highlights the most rewarding opportunities in money that previously been unavailable to most people.

Traditionally the world of money has been too complicated or difficult to access. Revolut’s new campaign crashes through those traditions to unlock a world of money that most people never thought they could be part of, and give people the confidence to make the most of it.

The TV spot, directed by Craig Gillespie (Cruella, I Tonya, Pam & Tommy) and produced by MJZ, is an energetic visual feast, as viewers are taken on an action packed journey across the world as a woman on a toilet crashes into a room of traders whilst trading stocks on her smartphone and  a travelling backpacker crashes into different countries to pay for food and drink on the go.

The ‘Your Way In’ TV spot echoes the wider marketing campaign, which saw billboards, buses and Underground posters displayed across Birmingham, Bristol, Edinburgh, and London – including iconic locations such as Old Street roundabout and Waterloo Station.

The out of home marketing goes against the grain of financial stereotypes and instead shows a diverse range of characters gaining financial empowerment. The campaign is shot by photographer Aidan Zamiri, who bought his signature studio style to bear following work with artists including FKA Twigs, Shygirl and Yung Lean. 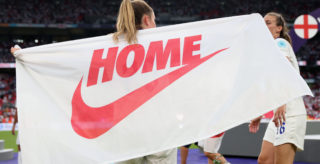