Classes were enrolled in traditional subjects with the occasional twist. Art became a life painting relay, chemistry was an excuse for a few drinks and home economics was more bun fight than Bake Off. Following a fiercely contested tug-of-war, with a few suspicious burly ringers putting in an appearance, the class with the most house points was rewarded with a well-deserved day off.

Dinner, drinks and dancing followed, with a surprise performance by Artful Dodger, dragging us back to the heady days of early UK garage.

We had a brilliant day and night. Thank you Braxted Park for having us and Highjam for helping organise. And Artful Dodger for getting a lot of people pretty sweaty in a tent. 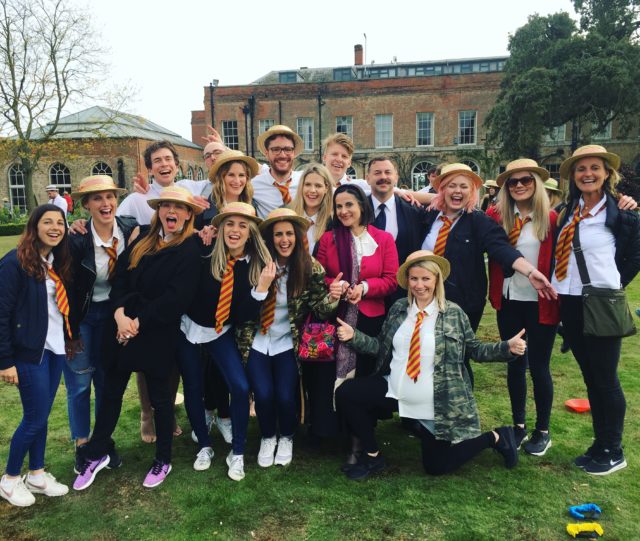 Last Thursday was that time of the year again…Wieden+Kennedy’s Founders’ Day, the day when we all get together to celebrate the founding of the agency and to get even more creative.

Like every year, the day’s itinerary was shrouded in mystery and this year was no different, apart from the strong hint that there would be a 1920s movie glamour theme, which we deciphered from the posters around the office, an invitation entitled ‘Wieden+Kennedy Makes the Movies’ and the 1920’s short film we were shown featuring certain famous faces from around the agency! We all gathered at the office first thing, and after a hearty breakfast, discovered that our day would be spent in teams, filming our very own 1920s silent movie. Props and all. The result was 15 short, rather peculiar and hilarious silent movies that, dare we say it, were pretty impressive! We even had a silent rap video/horror movie mashup titled “Jack the Rapper”. Turns out we’re not too shabby at this thing. We ended the day with a glitzy, Great Gatsby-esque dinner and party (minus the prohibition act) in Bloomsbury, dressed in our vintage finery. Just imagine lots of flappers and dapper gents, and an awful lot of feather boas. The fantastic entertainment included a live band, a burlesque dancer and a giant Martini glass. The highlight of the evening was of course a mass screening of our hard day’s work and a few awards. We had a great day all in all, and the best part was getting the chance to step outside of our usual roles and get creative whilst spending time with other W+Kers we don’t always have the chance to work with.