We’ve just releases a new campaign ‘Up’ for the new Honda Civic, featuring Imogen Horrocks, rising star of the climbing world and a member of Team Great Britain. ‘Up’ is a metaphorical film about the challenge that Honda faced, and embraced, in the creation of the all new Civic.

It’s a story about the struggle of bringing an idea to life, the young woman and her heroic ascent representing Honda and their own daring engineering journey. The clay mountain is based on the clay used in the design process of the car. Designers and engineers spent years developing the shape of the Civic to give it its new advanced and sporty style. Similarly, W+K worked closely with artists and designers at MPC London to develop and craft the world you see.

Long ago, Soichiro Honda, the founder of Honda, uttered simple but extremely powerful words; “Instead of being afraid of the challenge and failure, be afraid of avoiding the challenge and doing nothing”. Unsurprisingly this quote has been the driving force behind everything Honda has done ever since. Today, when it seems that iteration has become the norm. Where it has become acceptable to settle for ‘OK’. Where tweaking rather than radically changing is the way things are done. This attitude has never been more important. 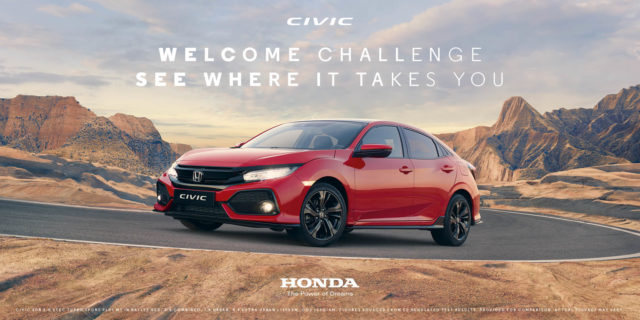