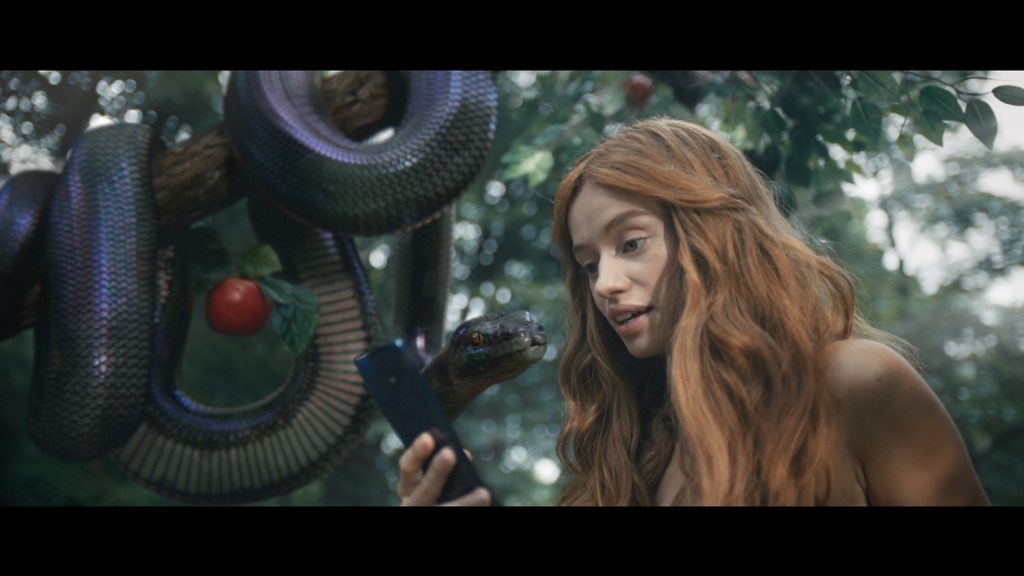 Help Three UK take on the phone cynics and bring some balance to the debate on the positives and negatives of mobiles.

The time-travelling film, directed by Ian Pons Jewell, was launched on Three’s Twitter, before appearing across social channels, digital, TV and cinema.

Our design team worked on press and out-of-home creative, which went live nationwide.

Since its launch, Three’s Index score (which is an average of a range of metrics including reputation and satisfaction) on YouGov BrandIndex score increased more than 28%, from 5.2 to 6.7.

Three’s score for impression also improved significantly, with an increase from 6.2 to 8.8, rising more than 41%.

Campaign – Pick of the Week: “Three may have served up the year’s funniest ad. The humour in this frenetic film spanning human myth and history isn’t massively sophisticated, but it’s elevated by sharp writing, nice production values and very enjoyable performances. It’s a rare piece of commercial video I’d genuinely like to see extended into some kind of TV-length work.”

More About Advertising: “Mobile networks used to be a premium sector for creative advertising, but the brands have long ceased to be distinctive. EE’s long-running Kevin Bacon campaign has fallen off lately, and O2 is trying something new with George the Poet instead of Sean Bean, but these days is best known for its music venues.

“It’s only really Wieden+Kennedy that is keeping up the creative tradition set so many years ago by Orange’s ‘The future’s bright’. Its ‘Go Roam’ ads were instant viral hits for Three UK, but instead of milking the line for years, we already have a new proposition, ‘Phones are Good.’
“The ads are good, too.
“W+K have been a real standout agency this year, delivering distinctive creative work for Nike, TK Maxx, Honda, Sainsbury’s, The FA, and Three UK.”
Adweek: “This hilarious ad busts the idea that life was better without smartphones.”

The British Arrows awarded the campaign a gold in the Digital Services category and bronze for Best Social Video. The spot also picked up a D&AD pencil in the Film Advertising category and took top honour of Gold of Golds at the Creative Circle Awards.